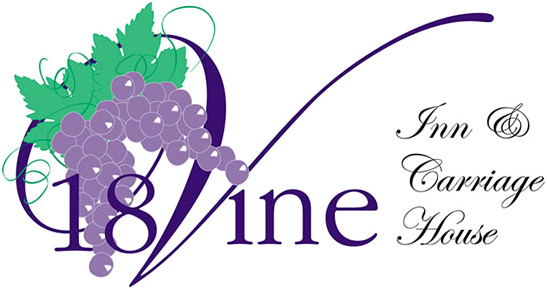 Relax and enjoy your next vacation at the 18 Vine Inn Carriage House Bed & Breakfast. The Inn has Available Rooms for Rent near Hammondsport, NY, so you can take in the beautiful sights of the Finger Lakes region.

Each room is uniquely decorated and has its own relaxing atmosphere. There are king, queen, and twin beds available to accommodate one to two guests. Two of the rooms can also be combined to create a suite, which will accommodate a larger party of four people. Whether you are looking for a romantic place to spend your honeymoon or simply a place to rest and relax, there is a perfect room for you!

The History of 18 Vine Inn and Carriage House starts in 1860 with Jules and Catherine Masson, along with their eight children building the Estate House and Carriage House. Jules Masson was the first champagne producer in the U.S. for the Pleasant Valley Wine Company (the No. 1 Bonded wine company in the U.S.) He is credited with producing Great Western Champagne and many other fine wines.

Jules Masson also dug out the shale in the hillside on Rt. 88 with his horses (housed in the Carriage House at 18 Vine) and the men working for him to form “natural cooling/refrigeration” similar to the original caverns in Europe. This site is the only one in existence in NY State. It is a National Landmark and Historical Site is still used and functioning today.

Jules Masson, champagne master at the Pleasant Valley Wine Company in the 1860s.
They founded the manufacture of sparkling wine in New York State.
(Image Harper's Weekly , 11 May 1872)
* From A History of Wine in America by Thomas Pinney

The Masson Family lived at 18 Vine for approximately 100 years. Everything is basically “as if time stood still”. The Carriage House was built for storage and shelter of horses and equipment for grape production. The original workbench area that was used for many U.S. patents, by Jules and his son, Victor, is still intact.

The Carriage House was built on a stone foundation, with a small stone cellar under the Coachman’s home. The Coachman and his family lived in four rooms which still have the original dry sink in the kitchen area. The Carriage House was built with huge raw wood beams. The flooring consists of large natural deck boards. The second floor features huge ceiling beams and the roof is metal. The doors and frame are made of plank wood. The Coach House features large dormer windows, as the Estate House; except where the horse stalls were located. Those windows were square, letting in enough light to feed the horses. The same stones used in the foundation and cellar, were also used for the original water pump, hitching post, and the two portcullis suspending the white wooden gateway to the back of the property, as well as the main Estate's cellar, foundation, and cisterns.

Catherine Masson (Jules’ daughter) Christened the “June Bug” on Keuka Lake for its First flight by Glenn Curtiss when she was 16 years old. Catherine married and had a son, Charles Champlin. Charles became a famous author and wrote for the L.A Times, several articles, publications and books. He penned the book, Boy in a Small Town, about growing up in Hammondsport, N.Y. and all the great times he had as a small boy staying and visiting at 18 Vine. Charles states “his dream was to have a library /study like his uncle Victor did at 18 Vine!” Charles’s book and the Curtiss Museum archives go into great historical detail about 18 Vine, The Carriage House, and the Masson Family with Photos, etc.

Also, Catherine had another son named Joseph Champlin who became a Catholic Priest. Joseph wrote books for both the Notre Dame and Syracuse Press, and for the Catholic Church on how to perform Weddings and Rites of Passage, He also produced many famous inspirational books, TV and radio shows.

Glenn Curtiss’, (NO. 1 licensed pilot in the U.S. and famous inventor of the airplane and motorcycle engines Birthplace and home sits NW adjacent to the Carriage House. Henry Ford came to Hammondsport and frequented the property, among other famous dignitaries of the time.

In 1960, the home was purchased by the Ernest Pletz family. Ernest was a lawyer and became the County Judge. His wife was the head of Steuben Mental Health. Mrs. Peltz loved the gardens and grounds and they worked in then for pleasure, while maintaining a full time gardener. They have two children Cindy and Charlie. They built an in ground swimming pool for then and the children of Hammondsport to enjoy. It was the first pool in the area. Many a party, memories, and even engagements proposals were celebrated there. The Peltz family made the second floor of the Carriage House into a basketball court for the children to enjoy in the inclement and cooler weather.

After Mrs. Peltz passed away in the 1990’s, and the children were grown up and moved away’ Ernest Peltz sold the home to George Powell Jr. in December of 2001. George remodeled the home and returned to the grounds to its original splendor. He made it a Bed ad Breakfast in June 2002 for the public to enjoy.

So what about Breakfast?

18 Vine is committed to serving freshly prepared breakfast treats to get your day off to a healthy start!

I offer you a warm hearted welcome! Roam through our landscape, hike the scenic gorge two blocks away. Take a dip in the pool, grill fresh produce and meats on the deck while enjoying a glass of wine or a frosty craft beer. Enjoy a magnificent fun-filled vacation. Comfortable elegance invites you to kick off your shoes and relax...
Catherine Powell - Innkeeper